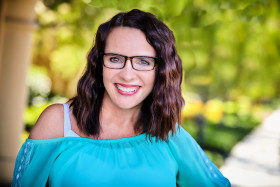 Michelle has used the gift of her duel degree (New England Conservatory of Music & Emerson College Boston, MA) to meld both the Vocal Performance discipline with the mastery of her instrument and understanding of communication as a Voice Talent for many years and has a multitude of commercial credits including: Personal Creations, Stater Brothers, Red Envelope Gift Company, Pizza Hut, T. Rowe Price, Jerome's Furniture, Melissa Data and many more. Michelle had IMDB credits and provides in show narration weekly for several Hollywood News programs which air in Asia and the UK. Her voice was also featured as Nicole Brown Simpson on the A&E Documentary regarding the 20th Anniversary of the OJ Simpson Trial. Additionally, she has several audio book credits including The Onion Parody, Back of Beyond, Once Again and others.