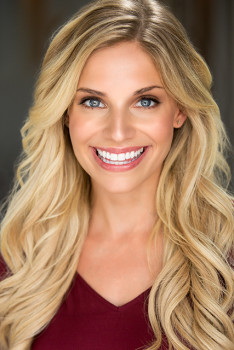 Sarah Marince is an American on-camera host & voiceover actor born and raised in Pittsburgh, PA. Now living in beautiful Orlando, FL…she has earned the reputation of being an engaging and energetic television host through her work for such corporate leaders as HSN, Wal-Mart, Walt Disney World. Sarah was nominated for The 2019 One Voice Awards in the category of Best International Voiceover Performance. The nominated video was for CES titled "What If" and can be found on the "Voiceover" page of her website. As a huge lover of all things Disney, it was only appropriate that Sarah kicked off her VO career in Florida when she became the "voice of" Walt Disney World’s Hollywood Studios. You can also hear Sarah’s voice in other Walt Disney World parks internationally… as well spots for CES (Consumer Electronics Show), the NFL, Little Tykes, Ashley Furniture, Renfrew, various phone apps and restaurant chains.