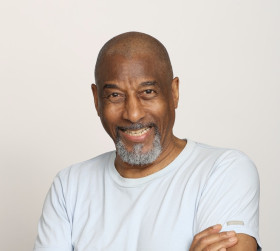 Deep,Conversational,Narrator- Storyteller w/Comedic & Gaming skills... If your voice sound of choice is in the realm of : Morgan Freeman, James Earl Jones, Barry White, Dennis Haysbert, or Sam Elliot..."Use Verl's Voice." Early on even before joining the Marine Corps.,Verl was a team player primarily with his brothers, but also close with neighborhood friends. In which they initiated and established Arts & Cultural events around San Juan Hill ( the original site of the classic "Westside Story" - now Lincoln Center for the Performing Arts ) and Uptown Harlem Proper...It was this activity that exposed and encouraged Verl to work with a microphone and large audiences. Verl Thomas is a compelling and consummate NYC Talent with experience at the microphone, on the stage, in film, on camera and in print. When you take the strength and discipline of a Marine and combine that with the experience and style of a world-wide traveler you get a story teller who can bring any script or character to life with a unique sensibility. Directors and Producers instantly respond to the diversity in Verl’s talent - his voice is powerful yet smooth, his style is laid back yet professional and his dedication to getting the work done authentically is undeniable. Career highlights for Verl, include on air time at the legendary WNEW in NYC, casting in the John Sayles classic film“The Brother from Another Planet", dozens of children’s book narrations by way of Gumbs & Thomas Publishers, The Discovery Channel/Primal Instinct/ID Production. To hear voiceover demos and view on camera and print work, please visit (voiceactmedia com) What three words best describe Verl,..Conscientious,Persistent & Modest.